One of the strangest omissions in 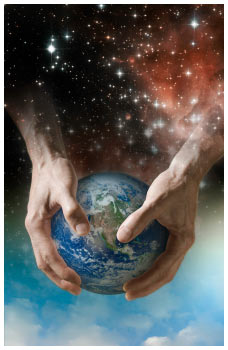 our modern life revolves around the calendar which hangs on the wall at your house and mine. Astronomy can supply most of the answers relating to the measurement of time, even when it touches the earliest years of human history. But even the calendar experts can give us no scientific reason for the division of time into seven day weekly cycles. Neither the stars, planets nor sun seem to provide any logical clues as to this arrangement of time. The days and months are based on predictable laws of planetary movements but why does our calendar today count days off in units of seven?

Creation and the Seven Day Week

Friends, there is only one answer for this question. The Bible says that God created the world in seven days and established a divine command for all time to come — that mankind should so reckon his time by weeks. Here’s the text in Exodus 20:8-11: “Remember the Sabbath day to keep it holy. Six days shalt thou labor and do all thy work. But the seventh day is the Sabbath of the Lord thy God; in it thou shalt not do any work, thou nor thy son, nor thy daughter, thy manservant, nor the maidservant, nor they cattle, nor the stranger that is within thy gates. For in six days the Lord made heaven and earth, the sea and all that in them is and rested the seventh day, wherefore the Lord blessed the Sabbath day and hallowed it.”

Please notice that God Himself is the author of the calendar week of seven days. It has passed down to us from time immemorial, and was included in the most ancient forms of calendars, regardless of race or language. There can be little question that we are dealing with an arrangement which the Creator established in the very beginning of human history. And the most amazing thing is, that no time has been lost since the great God gave His command about keeping the seventh day Sabbath in honor of creation. What He commanded, He has enabled man to perform. Miraculously the same seven day weekly cycle has been preserved through the ages so that man might enjoy the spiritual blessing which was placed upon the seventh day in the beginning.

So Which Day Is It?

Today there is no serious question from either clergy or layman as to which day the seventh day really is. Astronomers assure us that the seventh day today is the same seventh day which Jesus kept when He was here over 1900 years ago.

Now we come to that strange omission I mentioned in the beginning. Why do the majority of Christians break the Commandment of God by refusing to keep the Sabbath He ordained, blessed, and sanctified? The seventh day, or Saturday, has been made a day of labor and commerce in direct violation of the law written by the very finger of God.

Surely every believer knows that the Creator rested on the seventh day and hallowed it as the Sabbath. And all know that the fourth commandment enjoins the observance of the seventh-day Sabbath. Most followers of Christ know that He never kept any other day than the Sabbath day. Yet, in spite of these Bible evidences, the majority of the Christian world observe Sunday, the first day of the week, and worship on that day.

No change from seventh-day to first day worship is recorded in the Bible. If the change were catalogued there, it would no longer be so perplexing. But our Creator says, “I am the Lord, I change not.” Malachi 3:6. The commandment must still stand; for the Saviour declares that “it is easier for heaven and earth to pass, than one tittle of the law to fail.” Luke 16:17. Since heaven and earth are still standing and very much in evidence, the fourth precept of that law must still be obligatory. Jesus said: “Think not that I am come to destroy the law;” and, “If thou wilt enter into life, keep the commandment.” Matthew 5:17; 19:17.

Who Changed The Day?

Notwithstanding all this, an attempt has been made to change the day of rest. The majority today are not keeping the day that Jesus kept. And the question is, Who changed the Sabbath day from the seventh to the first day of the week, and by what authority? Every Christian who desires to “enter into life” should be concerned about this. We ought to know how this change came about, and if the greater part of Christendom is right in observing Sunday instead of the Sabbath day.

There is light on this question in the very etymology of the word “Sunday.” In early ages, mankind, forgetting the true Creator of the heavens and the earth “and all that in them is,” and being possessed, as all men are, with that inherent instinct which goes seeking after an object or being to worship, began to look about for such an object or being. Their choice rested on the biggest and brightest thing their eyes could see. They chose the sun as god. With its brightness and welcome warmth, it caused earthly life to bud, blossom, and bring forth; surely it must be the true god and the author of man’s being. Thus we find in history sun god’s a-plenty. They are pictured on temples and monuments of Assyria, Babylonia, Egypt, Persia, Greece, and Rome. Ra, Isis, Osiris, Baal, Mithras, Hercules, Apollo, and Jupiter all are heathen gods of the sun. Even in the Bible, sun worship is mentioned. In Job 31:26-28, we read: “If I beheld the sun when it shined, . . . and my heart hath been secretly enticed, or my mouth hath kissed my hand: this also were an iniquity to be punished by the judge: for I should have denied the God that is above.” Again in Ezekiel 8:16: “At the door of the temple of the lord, between the porch and the altar, were about five and twenty men, with their backs toward the temple of the Lord, and their faces toward the east; and they worshiped the sun toward the east.”

The pagans had “gods many and lords many.” Besides the sun, they worshiped the moon, Mars, Mercury, Venus, and Saturn. And they bestowed upon the days of the week the names of their gods. The sun, whence come the first day of the week was given over to this first and foremost of all gods, and called the sun’s day, or Sunday. The moon took second place and also the second day; hence Monday. Saturn held Saturday, the last day. So from antiquity, Sunday has been held as a day of worship.

Paganism was worshiping the sun on Sunday when Christ came. When the gospel from Judea came to our own ancestors in Europe, it found them paying homage to the sun on the first day of the week. As the Spirit of God, manifested in Christ, began to work upon the hearts of men, many left the worship of Apollo, the sun god, and joined the Christians.

After Christ’s return to heaven, the great majority were still pagans worshiping the sun on Sunday, while the followers of Jesus worshiped God on the true Sabbath, or seventh day. With mighty manifestations of God’s Spirit, Christianity mounted, and paganism began to wane. The Spirit-filled preaching of Paul in Asia, Macedonia, and Italy won thousands to the ranks of Christ. The church at that time was powerful, because of its zeal and earnestness and consecrated lives. The worship of the true God and the following of His commandments spread over the whole world.

Before Paul laid down his life, however, he wrote to the Thessalonians: “Now we beseech you, brethern, … that ye be not quickly shaken from your mind, nor yet be troubled, … as that the day of the Lord is just at hand; let no man beguile you in any wise: for it will not be, except the falling away come first, and the man of sin be revealed, the son of perdition, he that opposeth and exalteth himself against all that is called God or that is worshiped; so that he sitteth in the temple of God, setting himself forth as God. … For the mystery of lawlessness doth already work.” II Thessalonians 2:1-4, 7, R.V.

The Man of Sin

Soon after Paul was put to death, there swept over the church, in the midst of its prosperity, a sharp rivalry among the bishops of the leading churches as to whom should be the greatest. They became thirsty for more power. They did almost anything to inflate their membership, increase their bishoprics, and add to their power. They lowered standards of truth to raise membership. Multitudes joined the church. The white horse of purity and simplicity that the church had ridden, “conquering and to conquer,” was exchanged for the red horse of strife and worldliness. She traded her “gold tried in the fire” for the tinsel of popularity. Paganism stalked into the church without a changed heart or life. Scarcely a century after his death, Paul’s prophecy was meeting its fulfillment. There was a “falling away” from purity, and an induction of pagan principles and philosophies into the church.

In the early dawn of the fourth century, Constantine, a Roman general, ambitious for the throne, adopted Christianity as a matter of political advantage. He saw paganism declining. In reality, it was being absorbed by the church. Merely as a measure of popularity, he proclaimed himself a Christian. The fawning bishops acclaimed him.

Constantine faced this situation: More than half the people worshiped on Sunday—pagans. The others observed the Sabbath—professed Christians. He conceived the idea of cementing the two factions. Though professing Christianity, he did not want to conflict with the prejudices of his pagan subjects. Artfully balancing himself between the two, he allayed the “fears of his subjects by publishing in the same year two edicts, the first of which enjoined the solemn observance of Sunday, and the second directed the regular consultation of the aruspices” —a pagan practice. (Gibbon’s Decline and all of the Roman Empire,” Chapter 20)

Here we are then, face to face with the first law, human or divine, ever given for the purpose of making Sunday a day of sacred rest. And it is entirely a man-made law, uninspired by Divinity. On the seventh day of March, 321, Constantine gave forth his Sunday law:

“Let all the judges and town people and the occupation of all trades rest on the venerable day of the sun (Dies Solis); but let those who are situated in the country, freely and at full liberty, attend to the business of agriculture; because it often happens that no other day is so fit for sowing corn and planting vines; lest the critical moment being let slip, men should lose the commodities granted by Heaven.” Right there we find the genesis of Sunday keeping in the Christian Church.

The Council of Laodicea

The church followed the leadership of Constantine, and in the year 364, at the council of Laodicea, passed a law requiring that Christians must “not Judaize by resting on Saturday.” Eusebius, a noted bishop of the church, states, “All things whatsoever that it was duty to do on the Sabbath, these we have transferred to the Lord’s day.” Here, then, it is plain that a human hand, and not a divine, changed the Sabbath. Eusebius says, “We have transferred.”

Finally the Sabbath was crushed, and Sunday, the pagan holiday, was instituted. Henceforth, it was espoused by the church, and supported, as it is in our day. Doctor Eck, the astute lawyer and champion of the Church in its controversy with Martin Luther, admits, “The church has changed the observance of the Sabbath to Sunday on its own authority, without Scripture, doubtless under the inspiration of the Holy Spirit.”