How The Sabbath Was Changed

Today I want to answer the question which so many listeners have been concerned about since our first broadcast on the Sabbath question. How did the change take place, substituting Sunday for Saturday as the day of worship? This is possibly one of the most disturbing religious questions among thinking Christians today. Unfortunately, the issue is not examined publicly very often for reasons that we’ll consider today. But multitudes have wondered when, how and why the change came about. We have established in previous broadcasts that the Bible itself speaks with absolute consistency on this subject.

No Change Documented in the Bible

In both Old and New Testament there is not a shadow of variation in the doctrine of the Sabbath. The seventh day, Saturday, is the only day ever designated by the term Sabbath in the entire Bible. Not only was Jesus a perfect example in observing the weekly seventh-day Sabbath, but all His disciples followed the same pattern after Jesus had gone back to heaven. Yet no intimation of any change of the day is made. The apostle Paul, who wrote pages of counsel about lesser issues of Jewish and Gentile conflicts, had not one word to say about any controversy over the day of worship. Circumcision, foods offered to idols, and other Jewish customs were readily challenged by early Gentile Christians in the church, but the weightier matter of weekly worship never was an issue. Why? For the simple reason that no change was made from the historic seventh day of Old Testament times, and from creation itself. Had there been a switch from the Sabbath to the first day of the week, you can be sure the controversy would have been more explosive than any other to those Jewish Christians.

If the change did not take place in the Scriptures or through the influence of the apostles, when and how did it happen? In order to understand this, we must understand what happened in that early church soon after the apostles passed off the stage of action. Paul had prophesied that apostasy would take place soon after his departure. He said there would be a falling away from the truth. One doesn’t have to read very far in early church history to see just how that prophecy was fulfilled. Gnosticism began to rise up under the influence of philosophers who sought to reconcile Christianity with Paganism. At the same time, a strong anti-Jewish sentiment became more widespread. Very speculative interpretations began to appear regarding some of the great doctrines of Christ and the apostles.

The Conversion of Constantine

By the time Constantine was established as the emperor of Rome in the early fourth century, there was a decided division in the church as a result of all these factors. I think most of you know that Constantine was the first so-called Christian emperor of the Roman Empire. The story of his conversion has become very well known to students of ancient history. He was marching forth to fight the battle of Milvian Bridge when he had some kind of vision, and saw a flaming cross in the sky. Underneath the cross were the Latin words meaning “In this sign conquer.” Constantine took this as an omen that he should be a Christian, and his army as well. He declared all his pagan soldiers to be Christians, and became very zealous to build up the power and prestige of the church. Through his influence great blocks of pagans were taken into the Christian ranks. But, friends, they were still pagan at heart, and they brought in much of the paraphernalia of sun-worship to which they continued to be devoted. We mentioned in a previous broadcast about the adoption of Christmas and Easter into the church. At the same time, many other customs were Christianized and appropriated into the practice of the church as well.

You see, at that time the cult of Mithraism or sun-worship was the official religion of the Roman Empire. It stood as the greatest competitor to the new Christian religion. It had its own organization, temples, priesthood, robes—everything. It also had an official worship day on which special homage was given to the sun. That day was called “The Venerable Day of the Sun.” It was the first day of the week, and from it we get our name Sunday. When Constantine pressed his pagan hordes into the church they were observing the day of the sun for their adoration of the sun god. It was their special holy day. In order to make it more convenient for them to make the change to the new religion, Constantine accepted their day of worship, Sunday, instead of the Christian Sabbath which had been observed by Jesus and His disciples. Remember that the way had been prepared for this already by the increasing anti-Jewish feelings against those who were accused of putting Jesus to death. Those feelings would naturally condition many Christians to swing away from something which was held religiously by the Jews. It is therefore easier to understand how the change was imposed on Christianity through a strong civil law issued by Constantine as the Emperor of Rome. The very wording of that law, by the way, can be found in any reliable encyclopedia. Those early Christians, feeling that the Jews should not be followed any more than necessary, were ready to swing away from the Sabbath which was kept by the Jews.

Some of you may be greatly surprised by the explanation I’ve just made, and I’m not going to ask you to believe it blindly. I have before me a multitude of authorities to verify what has been said. Here are historians, Catholics and Protestants, speaking in harmony about what actually took place in the fourth century. After Constantine made the initial pronouncement and legal decree about the change, the Catholic Church reinforced that act in one church council after another. For this reason, many, many official statements from Catholic sources are made, claiming that the church made the change from Saturday to Sunday. But before I read those statements I shall refer to one from the Encyclopedia Britannica under the article, Sunday. Notice: “It was Constantine who first made a law for the proper observance of Sunday and who appointed that it should be regularly celebrated throughout the Roman empire.” Now you can check these statements in your own encyclopedias or go to the library and look into other historical sources.

Here is a statement from Dr. Gilbert Murray, M.A., D.Litt., LLD, FBA, Professor of Greek at Oxford University, who certainly had no ax to grind concerning Christian thought on the Sabbath question. He wrote: “Now since Mithras was the sun, the Unconquered, and the sun was the Royal Star, the religion looked for a king whom it could serve as a representative of Mithras upon earth. The Roman Emperor seemed to be clearly indicated as the true king. In sharp contrast to Christianity, Mithraism recognized Caesar as the bearer of divine grace. It had so much acceptance that it was able to impose on the Christian world its own sun-day in place of the Sabbath; its sun’s birthday, the 25th of December, as the birthday of Jesus.” History of Christianity in the Light of Modern Knowledge.

Looking a bit further into historical statements, Dr. William Frederick says: “The Gentiles were an idolatrous people who worshipped the sun, and Sunday was their most sacred day. Now in order to reach the people in this new field, it seems but natural as well as necessary to make Sunday the rest day of the church. At this time it was necessary for the church to either adopt the Gentile’s day or else have the Gentiles change their day. To change the Gentiles day would have been an offense and stumbling block to them. The church could naturally reach them better by keeping their day.” There it is, friends, a clear explanation by Dr. Frederick as to how this change happened. Another statement very parallel to this one is found in the North British Review.

But let’s move on to a statement from the Catholic Encyclopedia, Vol. 4, p. 153. “The church after changing the day of rest from the Jewish Sabbath or seventh-day of the week to the first, made the third commandment refer to Sunday as the day to be kept holy as the Lord’s day.”

Catholicism Takes Credit for the Change 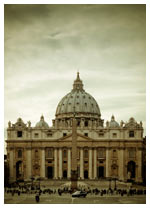 Now a quote from the Catholic Press newspaper in Sidney, Australia. “Sunday is a Catholic institution and its claims to observance can be defended only on Catholic principles. From the beginning to end of Scripture there is not a single passage that warrants the transfer of weekly public worship from the last day of the week to the first.”

The Catholic Mirror of September 23, 1894, puts it this way: “The Catholic Church for over one thousand years before the existence of a Protestant by virtue of her divine mission, changed the day from Saturday to Sunday.”

To point up the claims we’re talking about, I want to read from two Catechisms. First, from the Convert’s Catechism of Catholic Doctrine by Reverend Peter Giermann. “Question: Which is the Sabbath day? Answer: Saturday is the Sabbath day. Question: Why do we observe Sunday instead of Saturday? Answer: We observe Sunday instead of Saturday because the Catholic Church in the Council of Laodicea transferred the solemnity from Saturday to Sunday.”

Second, from Reverend Steven Keenan’s Doctrinal Catechism we read this: “Question: Have you any other way of proving that the Church has power to institute festivals of precept? Answer: Had she not such power, she could not have done that in which all modern religionists agree with her; she could not have substituted the observance of Sunday, the first day of the week, for the observance of Saturday, the seventh day; a change for which there is no Scriptural authority.”

Then from Cardinal Gibbons’ book, The Question Box, p.179, “If the Bible is the only guide for the Christian, then the Seventh-day Adventist is right in observing Saturday with the Jew. Is it not strange that those who make the Bible their only teacher should inconsistently follow in this matter the tradition of the Catholic Church?”

One more statement taken from the book, The Faith of Millions, p. 473. “But since Saturday, not Sunday, is specified in the Bible, isn’t it curious that non-Catholics who profess to take their religion directly from the Bible and not from the Church, observe Sunday instead of Saturday? Yes, of course, it is inconsistency but this change was made about fifteen centuries before Protestantism was born, and by that time the custom was universally observed. They have continued the custom even though it rests upon the authority of the Catholic Church and not upon an explicit text from the Bible. That observance remains as a reminder of the Mother Church from which the non-Catholic sects broke away like a boy running away from home but still carrying in his pocket a picture of his mother or a lock of her hair.”

That is a most interesting statement, is it not, friends? And it is a very true statement. There is some inconsistency somewhere along the line, because we have examined the statements of history, and you can check them for yourself in any library. I’m not reading anything one-sided here at all. I’ve tried to give you an unbiased picture. Although we have seen the claims made by the Catholic Church in their publications, we are not reading them to cast any reflection upon anyone, by any means. We are simply bringing you a recital of what has been written and what claims have been made.